Tier: At least 7-B, possibly 7-A, higher with Kuda Spirit

Attack Potency: At least City level, possibly Mountain level (Is a member of the Zetabrand, and thus should scale to Savy, who destroyed the top of two mountains with a punch. Fought and nearly defeated Shadow Rose, only losing because Foxtail got in the way of their fight, ShadowRose even acknowledging he was the strongest opponent he had ever faced, Fought Shuriken to a standstill), higher with Kuda Spirit (Casually overpowered ShadowRose)

Lifting Strength: Class T (Should be comparable to Bog and Larry)

Intelligence: Above Average (Shura is highly skilled martial artist, able to seamlessly merge silat with his own Zeta Style and nearly outmatch ShadowRose in single combat, even being recognized by Tentionmaru as being very skilled in close combat. He is also able to adjust his fighting style in accordance to the person he is fighting alongside [such as when he adapted Shuriken's music synchronized combat style] or against [such as ShadowRose's combat style].)

His previous character was DJ45. 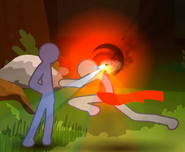 Shura is ready to use Jrangkong Palm 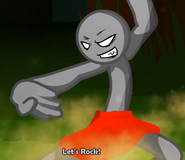