Stickpage Wiki
Register
Don't have an account?
Sign In
Advertisement
in: Good Guy, Hero, NOT RHG,
and 8 more

To watch over the stickworld

Deceased (Fused with The One)

Overseer Lolph appears as a large stickman with a red overseer aura. Lolph is about the same height of The One, but slightly shorter.

Lolph was born by his mother and his father Rolph, lolph's mother died by The One. Lolph had a brother named Dolph.

Rolph passed one of his powers to Lolph, making him immune to telekenisis powers. The Creator erases Lolph's memory. Then, he manages to fend The One off twice. His father took him on as his apprentice. Lolph quickly manages to learn some magic. However, they don't know that they are father and son though. The One returns again, with the help of one of his father's powers that he passed Lolph to, he manages to beat The One again.

Then Lolph returns to his father to continue his training. Since the soul containers restore The One's powers, he returns again, and grows even more powerful. Lolph still manages to win by using The One's own trident against him. The soul containers have been destroyed, meaning The One won't return again. Meanwhile, Lolph completes his training. Rolph senses something so he asks Lolph to check it out, when Lolph comes to investigate, Dolph appears and they fight. Lolph manages to win but Dolph buffers up himself and Lolph manages to win again. Dolph sacrificed his own soul and now The One returns much far stronger than Lolph.

Lolph loses not only the fight but he loses his life too. After The One defeated Rolph, he obliterated into red liquid (blood) and gave up all of his remaining powers to Lolph, making him stronger and gain a red overseer aura. Lolph nearly defeated The One, but Dolph buffers up himself again. In the end, Lolph defeats The One making The One never return again.

Now, Lolph's name is changed to Overseer Lolph and now has to watch over the Stickworld. And his assistant is Mike.

Magic Control is an attack that can make the character that has the ability be able to control objects such as certain magic powers. (Any magic power spheres)

vs. The First Overseer - WIN

vs. The Creator - DRAW

vs. The Elder Seprent - WIN

vs. The Dark Seprent - WIN

vs. The Ultimate Stickbot - WIN

Lolph before his true darkness form.

Lolph in his magician form. 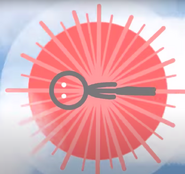