Franky was a FluidAnims RHG created by Frank.

Born when the wind began blowing, Franky had a wonderful childhood. Son of a humble family of farmers, he was always protected from the vanities of man, and grew to become as strong and as intelligent as his father and mother respectively. They lived in the outskirts of a small village by the name of Laureles, memorable for the sweet aroma of blooming flowers every spring. The place outmatched paradise in the eyes of Franky, but times were soon to change. A group of vandals arrived at Laureles one August afternoon, and began tearing the place down for its riches. Entire families, houses, and fields were all burned to ashes that day. The thieves soon reached Franky's residence, and murdered his loving parents at mere sight. They didn't stand a fighting chance. But for some reason, the vandals left Franky behind; didn't even touch him. Whether by divine intervention, or a slice of decency, he was left harmless. But he was scarred forevermore.

He uses a pickaxe and a shield.

He's got a low pain resistance. Regardless of the practicality of his armor, it wears him down significantly upon constant usage.

-He is extremly good when using his scythe.

-He can morph into any shape desired.

Synopsis used to be a farmer from chernobyl. 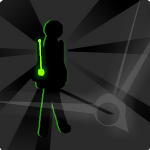