Bog is an RHG. He appears as a mysterious entity and it isn't clear what motives he has in mind to pursue. Little is known of Bog, but it is known that it is hard to predict what he will do in order to kill. Bog is usually neutral but if he begins to get hungry he and his blood will search for living things to eat and will not be swayed or stopped so easily.

Bog is unusually quiet although he tends to act upon impulse and can become very frantic. He also likes to smile at any moment, sometimes it describes his happiness, sometimes it describes his madness too. He is considered by other fighters as threatening because of his unorthodox manner of defeating his victims, he either will let his smaller acidic creatures eat his opponent's facial region or in some cases he will eat his enemies entire head.

Weapon/Power: He can control and manipulate his own acidic blood at will using it in various supernatural ways. Bog can control how viscous and how acidic his blood can be, whether it be solid or liquid, and whether it be corrosive or non-corrosive. He also has the power to perform rituals and cast spells.

Weaknesses: Heat, fire, blunt objects and if his head is cut or blown off, it will take slightly longer time to regenerate than any other body part, causing him to slow down.

VS Giant With Larry - WIN (Not official)

Bog vs Gildedguy — LOSS (Not official)

His first character was Virus and the second was ACbot.

He is like a common virus, but a very powerful one. What Virus does is he takes over cells in your body (like a weaker virus) though he can literally clone himself using you as a host (if you understand how a virus works you'll understand a little more).

Virus was a weaker yet sustainable virus, that unknowingly rapidly multiplied and provided its self with its own nutrients. Growing over time he devoured a various amount of humans and mimicked their structures turning into what he is now.

If AC gets frustrated he jumps out of his host and lashes out in rage, so he doesn't use any strategy or tactics.

AC and Bot were founded separately, and since they were testing out a mutation for warheads they made a test and put them together naming it 'ACBot'.Bot was found in the country side of Scotland and was then deported to AREA 51 for research.'ACBot' is a genetically enhanced mutation body host for the 'AC' mutation.The 'AC' only usually comes out when excited,angry or upset but from time to time he breaks out in a combo 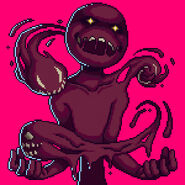 Fanart of Bog vs Gilded Guy created by MissCupid9 on pinterest.

Fanart of Bog vs. Blue created by @Ha15337368 on Twitter.
Community content is available under CC-BY-SA unless otherwise noted.
Advertisement